I have had a fascination with flamingos ever since my mother passed away back in March, 2008.  It all started when my dad was going through some of her things and found two plastic flamingos in a bag that my Mom had purchased.  My thoughts are that she intended to put them in her garden that summer but of course never got the opportunity.

However, those two plastic flamingos have brought a little bit of happiness to my sister and I.  Once we found out about them we thought that they would be a great way to remember our Mom in a happy way.  So every year on the day that she died (March 4th) we place a pink flamingo out in each of our front yards in her memory.  It is a way to make us smile on a depressing kind of day.  It probably sounds kind of silly to some but I know that my Mom would have appreciated it.

The pink flamingo thing didn’t stop there.   Whenever I travel somewhere where I know there is a possibility to see one I take note and am on a quest but I haven’t had much luck in seeing one yet until now.  In just a few weeks I will be traveling with my husband to Aruba to celebrate our 35 year anniversary with the big draw for me to see flamingos.  I am PUMPED!  It’s called Renaissance Island and I am going to see flamingos….Guaranteed!   I will also be able to get up close and personal and if I want I can feed them too!  There is supposedly only six of them but they remain there all year so they are probably more tame than wild.  But that’s okay with me.  Yes, I know I could go to the zoo and see them but that is not the same thing as far as I am concerned.

I did a little research and found out that there are six different species of flamingos that look somewhat different than the norm that I am used to. 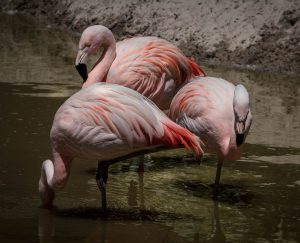 Flamingos are born with grey feathers but once they take in their natural diet of shrimp and algae that contains carotenoid pigments they will obtain their pink plumage.  They range from 3.3 to 4.6 feet tall and weigh between 3.3 – 9 pounds.  With their  long stilt like legs they can wade into much deeper water than other  wading birds.  They have a long neck and thick, curved bills, which helps them filter their food from muddy water.

Flamingos are non migratory birds but may move if there is a change in the climate or if water levels change in their breeding areas. 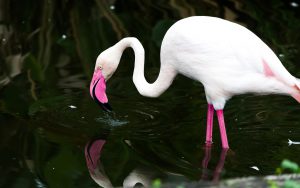 Flamingos like to flock together and can be found wherever there is plenty of access to their diet of shrimp, snails, and algae.   They used to breed in the Florida Everglades however, now there is just the occasional sightings of them.  These sightings are usually found in the southern part of the park.  I have been to the Everglades a few times and have never seen one.

The best places to see them are in the Bahamas, in Aruba where I am going, Bonaire, Cuba, and also Africa and the Middle East.  I am going to give you a few that I have discovered in my research. 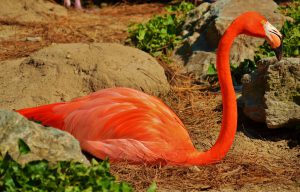 I think that the pink flamingo is a bird that most people would love to see in the wild.  With its long stilt-like legs, long curvy neck, thick beak, and mostly because it is a beautiful, bright pink bird that stands out from the crowd.

If you want to see flamingos in the wild you have a few options.  You can travel to Aruba as my husband and I are doing to see just a few of these beautiful birds, or the Bahamas, Bonaire, Cuba, the Middle East, Africa, or India.  It all depends on where and how you like to travel.  I say go for it!

I will let you know how the Aruba trip goes in a few weeks.  I know it is going to be great!

One more thing!  If you have any comments that you would like to make about this article please feel free to do so below.