Well I missed it!  I walked inside my house to get a drink last Saturday evening and a Barred Owl decided to fly right over my deck at the same time.  My husband Jeff, my sister, and her husband were all outside getting some great views of that awesome owl.  Oh well better luck next time for me :-(. 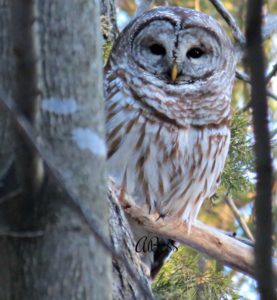 My husband and I happen to live in a subdivision that has some areas with woods but they do not surround us.  So if you have a wooded area near your property you may have them around too.

How do you know if they live around you?  The best way is to observe in the evening hours as we did this past weekend.  It was about eight o’clock when the owl flew over our house.  They like to feed at dusk so it was probably out hunting for its next meal.  They can also be seen at dawn hunting for food too.

When feeding, a Barred Owl will generally be perched up in a tree watching for its prey which is small mammals.  So check out the trees in the early evening or early morning hours because you may see one there too.

Another way is to listen for them.  Just this morning around six thirty I heard a Barred Owl calling.  It sounds like it is saying “WHO COOKS FOR YOU! WHO COOKS FOR YOU ALL!” and sometimes it can sound pretty creepy especially when it is late at night.    Although they may also call during the daytime.

Just a side note….the first time that I heard one we had just moved to a house on some acreage and  surrounded by woods.  I was in my bed sleeping with the windows open and heard a most unusual sound.  I sat up in my bed with my eyes wide open (so my husband claims) terrified of what the heck was outside my window. 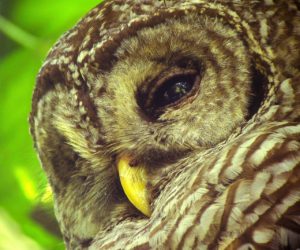 The Barred Owl is a fascinating owl that you will find near woodlands mostly on the eastern half of the United States and Southern Canada.  You will know one is around when you hear their very vocal call “WHO COOKS FOR YOU!….WHO COOKS FOR YOU ALL!”  Or you may also see one perched in a tree near a wooded area as it hunts for its next meal…a small mammal or bird.

This time of year is when the young start to go out on their own so it is a good time to see one either at dusk as we did or at dawn.  So keep an eye or ear out because you may get to see one of these beautiful owls near you.