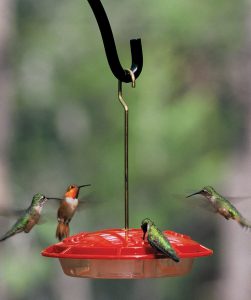 I love this time of year because hummingbirds are very abundant at my feeders.  Just sitting on my deck being entertained by those Ruby-throated beauties as they zip around, chasing each other, and making their humming sound is enough to make anyone’s day.  This bustling activity started around late July and will continue through August and into a little of September.  If my husband and I are lucky enough we may get one or two even later than that.

“Oh NO that’s not good!” some would say, “the poor hummingbirds will get confused and will not migrate as they should and freeze to death!”  But that just is not the case.  Unless the bird is already sick it should survive.

Let’s take a look at how these cute little guys (and gals) operate.

The reason why your hummingbird feeders are busy right now is because the males have already started to migrate back to Central America.  This generally starts about mid-July.  Then soon after the females and the immature hummers follow.

Interesting Fact:  Bird banding studies have shown that in their southbound migration heading towards their homes in Central America, the Ruby-throated hummingbirds coming to your feeders are completely replaced by new hummingbirds within twenty-four hours.  So in other words, the hummers that you are seeing today may not be the same ones tomorrow at your feeders.  Right now you may be seeing a lot of males coming in to feed.  In a few weeks you may only just see females and or immatures.  Immatures (be it male or female) look like the females.

The peak of the migration is usually around the second week of September.  However, it all depends on the internal clock of the hummingbird.  Hummingbirds do not travel in groups like a lot of other species of birds do so it isn’t unusual to get a straggler hummer in October or even later.  In fact, one year we had a daily visitor at our feeder throughout November.

Here’s A Tip!  The hummingbird nectar recipe is:

We actually change the recipe to 1 part sugar and 3 parts water in August.  It provides more energy for the birds as they get ready for their journey home.

How Does A Hummingbird Know When To Leave?

So how does a hummingbird know when to leave?  Hummers can tell that the days are getting shorter based on the amount of sunlight each day and usually leave when they have built up enough fat to make their journey home.  It has nothing to do with the temperature outside nor the amount of food available for them as some people think.   Because hummingbirds will leave even when there is still an abundance of food which is insects and nectar from plants and or your feeder.

So When Should You Take Your Feeders Down?

It is not necessary to take down your feeders to try to force the birds to leave as some people think.  The hummers are in their migrating mode and are looking to boost their energy for their long journey.  If you do not have nectar for them they will just find another feeder somewhere else.  So why not keep your backyard entertainment going?  In addition to that, hummers tend to return to the same feeders year after year so if you don’t have yours out and your neighbor does well……

If  you do decide to leave your feeders up do not forget to keep up with the maintenance.  With not as many hummers coming in as before, your nectar may be sitting longer which can ferment and become moldy, and that can be harmful for hummingbirds.  So be sure to clean the feeder every few days.  You should be doing that anyway even throughout the summer months.

Look Closely At The Stragglers At Your Feeders!

As I mentioned earlier, we have had a straggler Ruby-throated appear at our feeder back in 2011 and it stayed through November.  Others have had hummingbirds coming to their feeders into December.  However, those were not Ruby-throated (the hummer in the eastern U.S). So pay attention to the colors on the bird as you may have a rare one.  More on that later.

Note of Caution:  Make sure to take your feeders in each night if the temperatures get below 30 degrees.  The nectar will freeze and also could ruin your feeder.

What You Should Watch For: 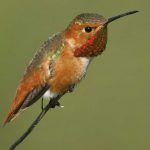 In October and November the some western United States species of hummingbirds have been known to show up in the eastern parts.  Most common is the Rufous and Allen’s Hummingbird, but one couple had a Calliope at their feeder in Indiana.  In Northern Kentucky where I am from, there has been one couple who have had a Rufous visit their feeders every year for the past couple of years in late October through the winter months.  There has also been sightings in Ohio during this period.  The Rufous male hummers are a bright orange on the back and belly, with a vivid iridescent-red throat. The females are green with a spot of orange on their throats and rufous streaks in the flanks tail.  However, they will be in their non breeding plumage which is a duller color.  They probably will not look like the hummingbird in the photo.

Here’s A Tip!  I was not fortunate to be able to go see the two Rufous sightings that have been showing up in Northern Kentucky  and Ohio, but my husband has.  He found that the owners who had the birds coming in to their house feeder had  bright red plastic flowers nearby to lure the birds in.  We have tried this but have been unsuccessful so far…but we are not going to give up yet!

How Do These Little Guys Survive?

Many of the western species nest in cold climates and some in higher elevations.  The Ruby-throated 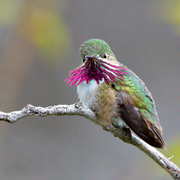 cannot.  What happens is the western species go in to a hibernation-like-state which allows the bird to drop its body temperature from its normal state of 102 degrees F down to 54 degrees F, which helps them save energy.  Also, they are very good at finding  those dormant insects and spiders that survive through the winter for their food source.  Then there is tree sap which hummers like.  The Sapsucker Woodpecker drills holes in trees to get sap for themselves and those holes help the hummers retrieve it too.

Hummingbirds have an inner clock that tells them when to leave for their long journey so keeping your nectar feeder up beyond mid September is not going to harm them.   Once you have seen the last hummingbird at your feeder wait at least two weeks to make sure there are no stragglers.  Theses guys will appreciate the extra energy that you are providing for them.

Pay attention to those stragglers too!  Sometimes the western species of hummingbirds (i.e. Rufous, Allen’s, Calliope) end up at the eastern United States resident feeders and will stay throughout the winter.  They can survive because of the hibernation-like-state that they can go into that helps them survive freezing temperatures which is unlike the Ruby-throated.

If you are lucky enough to get a hummer beyond September you will have continued enjoyment of those beautiful birds!