When do baby birds leave the nest (fledge)?  Not all baby birds leave the nest in the same time frame.  Some birds such as woodpeckers and songbirds (i.e. cardinals, chickadees, titmice, wrens, orioles, grosbeaks) are born with their eyes closed, are bald, completely helpless,  and are totally dependent on their parents to keep them warm and fed for a good length of time.   Eagles, hawks, and owls are born with their eyes closed too but they are not bald.  They have down on them when they are born but are still in the constant care of their parents just like the woodpeckers and songbirds.  These birds are called altricial birds or perching birds (birds that are able to perch on trees).

Even when altricial birds finally leave their nest they will still be taken care of by their parents for a period of time until they are able to fly because their flight feathers are not fully developed yet.

Here is a timeframe for how long it takes for each species to fledge the nest:

You will notice that the bigger the bird the longer it takes for the bird to leave the nest. 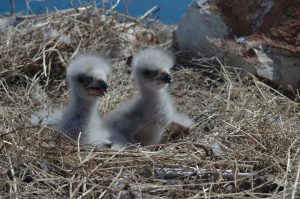 Then there are the precocial birds.  Birds that fall into this category are ducks, shorebirds, gulls, and geese.  These birds are born with their eyes open and covered with down.  You could say that these birds are ready to hit the ground running after they have been hatched.  In a matter of just a few hours or just up to a couple of  days, depending on the specific bird, these birds will be able to leave their nest ready to run, and swim.  Some but not all of them are even able to find their own food at this point without the help of their parents.  These birds do not need as much of the parental care like the altricial birds,  but they do still need their parents for a while.

Just to give you an example, when a mallard duck is born it will be ready to follow its mama to the water within a day’s time.  It will be able to swim, dive, and feed on its own.  However, it will continue to follow its mother around for the next fifty or sixty days when it finally is able to fly and go out on its own.

Canada Geese pretty much are the same way except the young may not fly for up to three months.    My husband and I witness this practically every year as there usually is a family or two of Canada Geese that hang around all summer on our pond.  About July some time you will then see the parents teaching their young how to fly as they go running with them down a hill hoping that their goslings will take off into the sky.  Some of the youngsters do take off but some are not ready yet.  So they do it over and over again until finally they are all taking flight.  Talk about entertainment…this is it! 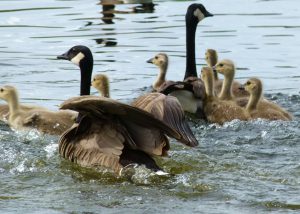 As for the shorebirds such as killdeer, sandpipers, and plover, they will leave their nest soon after hatching and will not fly for up to three weeks after that.

Seagulls leave the nest after a few days and are able to fly at about five to seven weeks.

Not all birds leave/fledge their nest in the same amount of time.  Some birds are born with their eyes closed, are bald and helpless,  and need their parents constant attention.  These birds, called altricial birds, will need a little more time to grow until they are ready to leave the nest.  Songbirds such as the cardinal, wren, titmouse, woodpecker, chickadee, and orioles fall into this category.  Other altricial birds are the owls, hawks, and eagles and they are born with their eyes closed too but are covered in down.  They too will need to be tended to by their parents for a little while before they are able to leave the nest.

Precocial birds on the other hand have different nesting habits.  These birds such as the shorebirds, ducks, geese, and seagulls, are born with their eyes open, are covered in down,  and ready to take off out of their nest within hours or a day or so after hatching .    These birds can run, swim, and in some cases find their own food right away.

The one thing that both the altricial and the precocial birds have in common after leaving their nest is continued nurturing by their parents.  These birds will still need to learn how to fly and to be able to fend for themselves.  Once they reach this point they are considered mature and ready to go out on their own.