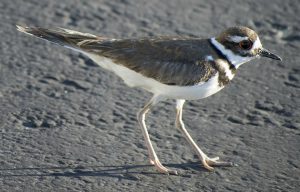 What is a Killdeer?  A Killdeer is a type of shorebird in the plover family.  This bird is not necessarily found along the shoreline however.    You may have seen one on a gravel road, in an open field, on a golf course, in a parking lot or maybe in a baseball field.  It has long legs that helps it run fast, a short neck, with a longer beak and tail.   You can’t miss their loud piercing call that sounds like they are saying “killdee!” 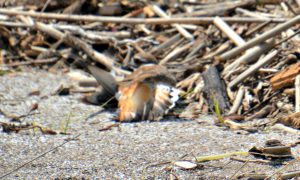 Killdeer are known for their fake broken wing act too, where you will see them limp and flap their wings helplessly as if they are hurt.  They really aren’t injured, they are just trying to fake you out and lure you away from their nest or their babies.  My husband and I just encountered this behavior a few weeks ago (photo above).  As soon as I saw the mama acting like this I of course wanted to see the babies as I had never seen baby Killdeer before.  I stayed a good distance away so as not to disturb them and spotted four of them (see one baby in photo below) through my binoculars as they scurried along in the gravel.    Such an enjoyable sight to see! 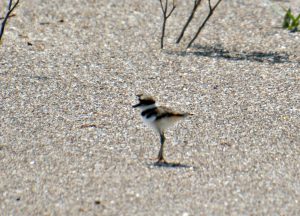 Killdeer can generally be seen anywhere that there is gravel, dirt, golf courses, parking lots, and fields.  You know that they are around when you hear their high pitched call of “kill dee” as they fly above or near you.    You may also come across one as they try to fake you in to believing that they have a broken wing.  They appear to limp along with their wings outstretched looking pitiful as they try to lure you away from their nests which are on open ground,  or from their newly hatched young.  If you search the area you may be able to spot a baby or two moving about nearby.  Just enjoy from a distance though because you do not want to disturb them.

If you have anything that you would like to add about this post or have any experiences with Killdeer, please feel free to make your comments below.