Have you ever driven along a country road or even along the highway and have seen what appears to be doves spaced out along the wires.  Well maybe you should take a closer look because it could be a Kestrel.  What is a Kestrel you ask?  Well the actual name is American Kestrel and it is a type of falcon (bird of prey).  There are six different species of falcons that reside in North America with the Kestrel being the smallest and most common.  The Peregrine Falcon is the largest one.

How To Identify A Kestrel

The American Kestrel is about the size of a Mourning Dove at 10.5 inches in length.  Its slim, pointed wings extend to about twenty three inches.  The male has  grayish blue wings (females are reddish brown) and the head has black vertical lines at the ear and below the eyes on a white face.  Both the male and female have a reddish brown back and tail with most of their body dotted with black. 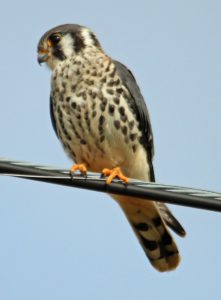 As mentioned earlier you can find American Kestrels perched on telephone wires, poles, or hovering over low vegetation in meadows, grasslands, farmland, and deserts searching for their next meal.  They feed on small mammals such as voles, mice, and sometimes bats but also small birds, lizards, frogs, spiders, and large insects (grasshoppers are their favorite, beetles, dragonflies, moths, and caterpillars).

My husband and I always see them perched on wires along farms as we drive to the nearby park.   Those high wires are a great place for them to spy a vole or mouse moving down below.  If they don’t have any luck that way they will hover over the field with their wings beating rapidly waiting for those little critters to make any movement…then POUNCE!  They grab their prey with their curved, pointed beak.

ADDED NOTE:  Taking photos of this bird is another story.  They are very skiddish birds and do not stay still enough to get a good picture even when they are perched.  They will just keep shifting down the wire away from you. 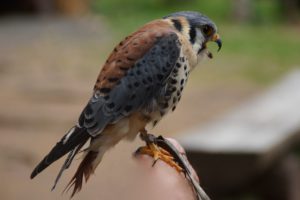 Kestrels are cavity nesters and will make their nests in dead trees, in cliffs, and in the hollows of giant cacti in the desert.  Man made nest boxes that are placed high up in trees (about ten to thirty feet) or on poles also work too.  So if  you have the right habitat for them you may want to try nesting boxes if you want to attract them to your property.

Four to Six eggs are laid and incubation is by both the male and female which takes up to thirty one days.

In the first two weeks the female tends to the young most of the time while the male brings food to them.  After that both sexes do the hunting for food.  Once the young fledge the nest the parents will continue to feed them for up to twelve more days. 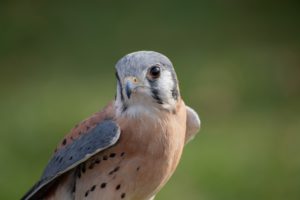 Interesting Facts About The American Kestrel

It is not uncommon to see American Kestrels perched on telephone wires or poles along farmland, grasslands, meadows, and even highways.  You may discount it as a Mourning Dove when in actuality it is the Kestrel, so look closely the next time you are out and about.   American Kestrels like to perch on the wires  so they can observe their prey moving about (i.e. a vole or a mouse).  When they do locate one it is so fascinating to watch them dive down and capture it with their beaks.    Now that’s nature at its best!