As of December 2016 there were 433 species of birds on the official list of the American Ornithological Society North American Bird List.  The Ohio Bird List has grown from 222 in 1838 when it first started and has grown each year since. 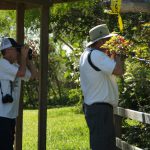 There is no guarantee that you will see each bird on this list  unless of course you are as determined as some ambitious birders out there are.  If you have ever seen The Big Year Movie you will understand what I mean by this.  Three guys who really get into birding doing a “big year” and going the extra mile (literally) to see as many different species of birds that they can.  It is a true portrait of the life of an avid birder big year or not.  I know because I have a husband and brother-in-law who are really in to their bird watching.

Each year my husband starts over and checks off his list as he sees a particular bird.  He has an Ohio list, Kentucky list, backyard list, and lists for each state we visit on vacation.  It is a hobby of his and mine which we love to do.  I am not as hard core as my husband but I still enjoy watching them with him.

Where Do You Go To Look For Birds?

In Ohio, there are 10 Bird Watching Hotspots that I know of that birders like to go to for the majority of the birds on their checklist (my husband being one of them).  There are plenty of other places to see some of the birds mentioned in these places but these are the HotSpots to see an abundance of the birds.  They are listed below:

#1 Magee Marsh Wildlife Area  is in Oak Harbor, Ohio which is up by Lake Erie.  It is considered one of the premier birding spots as there have been more than 300 species of birds spotted there and by the Ottawa Wildlife Refuge that surrounds it.    This area contains wetlands, woodlots, and beaches which make great birding areas. 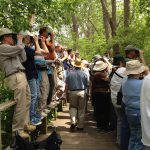 In May thousands of birders, photographers, and nature lovers flock to this area where they can see large songbird concentrations preparing to migrate across the great lake toward their breeding grounds in the north.  Many birders, including my husband and me, make this trip annually as it is an amazing encounter with warblers, vireos, and other songbirds and shorebirds that you will never forget.  There are up to 30 warbler species alone that you can see just walking on the boardwalk at the marsh.  So up close and personal it is an awesome sight to see.

Just an Added Note:  If you want to make the trip in May to stay a day or two make sure to book very early.  Many birders book a year in advance so a lot of places get filled pretty fast. 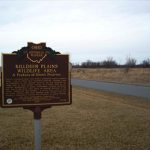 #2 Big Island & Killdeer Plains is in Ashley, Ohio.  These two places are only 8 miles apart so they are included together.

Big Island is approximately 5000 acres in size, and is situated within a major flyway for waterfowl and shorebirds traveling from the Ohio River to the Western Basin of Lake Erie.  There have been 265 species of birds recorded there and consists mostly of diked wetlands.

Killdeer Plains is 9230 acres and is mostly cropland and grassland and over 1000 acres of marsh.  It has a peak fall population of 30,000 ducks and 11,000 Canada Geese.  Wood ducks, mallards, blue-winged and green-winged teal, black ducks, and Canada geese are the primary species of waterfowl that use the area.

#3 Shawnee State Forest is in West Portsmouth, Ohio and is the largest contiguous forest in Ohio covering 63,000 acres.  Here you may find several different warbler species as well as other songbirds and it is also a great place to see ruffed grouse.

#5 The Edge of Appalachia Preserve is located 75 miles east of Cincinnati and has over 15,000 acres

of protected woodlands, prairies, and streamside forest along Ohio Brush Creek in Adams County.  Spring and summer is a good time to bird which is during breeding season and where you can find chuck-will’s widow, screech owls, barred owls, great horned owls,  and a number of warblers, henslow’s sparrows (as seen in photo), white-eyed vireos, yellow-breasted chats, and blue grosbeaks to name a few.

Fernald Feed Materials Production Center located mostly in North West Hamilton County, Ohio. This 1050-acre nature preserve features 140 acres of wetland habitat including three lakes, 400 acres of forests and 360 acres of grasslands including tall grass prairies.  The total species lists is at 240 since it first opened in 2008 and that includes Garganey, Eurasian Wigeon, Black-necked Stilt, Wilson’s Phalarope, and Golden Eagle for rare birds sited there.  In addition to a wide range of migratory water fowl you will also see  Blue Grosbeaks, Dickcissels, Grasshopper Sparrows, Savannah Sparrows, Bobolinks, and even the occasional Henslow’s Sparrow.  Migratory song birds are also seen there such as Gray Catbirds, White-eyed Vireos, and Yellow-breasted Chats.

#7 Gilmore Ponds is a 200-acre wetland nestled in the midst of an industrial park within the city limits of Hamilton, Ohio.  It is bordered by two tributaries, Walker’s Run to the east, and the historic Miami-Erie Canal to the north.  There is one permanent body of water, Old Ice Pond, that floods seasonally and provides the best habitat for breeding and migrating waterfowl, shorebirds and long-legged waders such as Great Egrets, Black Crowned Night Herons, Green Herons and Great Blue Herons.   Other usual visitors are the Pied-billed Grebe, Common Moorhen, American Coot, Green Heron, Black Crowned Night Heron, Least Bittern, Prothonotary Warbler, Willow Flycatcher, and Rusty Blackbird. 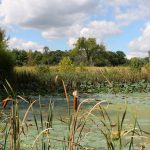 #8 Shaker Trace Wetlands at Miami Whitewater Forest is a great area for marsh birding and is located in Hamilton County, Ohio.  Pied-billed Grebe, American Bittern, Least Bittern, Blue-winged Teal, Ruddy Duck, Virginia Rail, Sora, Common Moorhen, American Coot, Sedge Wren, and Marsh Wren are among the summer residents which are otherwise very difficult to find in this area. The area is good for dabbling ducks and fair for diving ducks in migration. Common Snipe are abundant in early spring, and other migrant shorebirds may be found in numbers that vary with water levels.

The wetlands are surrounded by grassland which attracts Grasshopper and Savannah Sparrows in summer and Northern Harrier and Short-eared Owl in the winter. Dickcissel and Upland Sandpiper appear occasionally in migration.

#10 Shawnee Lookout/Oxbow sits at the junction of the Great Miami River and the Ohio River.  This area has frequent flooding which attracts numerous waterfowl and shorebirds. The two rivers also form a natural migratory corridor for many other birds.  During spring migration, it’s not unusual to find 25 or more species of warbler in a morning as well as different shorebirds, herons, and terns.  This is a good area  to see American White Pelican, Black-crowned Night-Heron, Peregrine Falcon, Black-billed Cuckoo, Northern Parula, Cerulean Warbler, and Blue Grosbeak.

Going over  “Lost Bridge”  from Shawnee Lookout to the Oxbow you will see Cliff Swallows which nest under the bridge, and sometimes an abundance of  Bald Eagles (winter) that are often seen in the area.   The bridge itself gives views of the Great Miami and features gravel bars just under the bridge at low water. These are attractive to shorebirds during spring and fall migration when the water is low.

As mentioned earlier, these are hotspots that my avid birder husband as well as many other birders and photographers, like to go to see all kinds of species of birds.  You will also find these places on Ohio E-bird as well as plenty of other hotspots that are in Ohio.  All you have to do is click on the county that you live in or are interested in, and it will provide links for you with information about the places to see various species of birds.  Most importantly, it will give you recent bird sightings in those areas.

As I am typing this, I had to notify my husband who is in Pike County today in eastern Ohio, that there has been a Eurasian-Collared Dove spotted there by three people just yesterday.  I know that he is going to want to check it out after he gets off work.

If you have a good birding spot that you would like to share or if you have any comments about these hotspots please do so below.