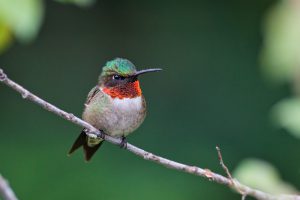 They’re on their way!   Ruby-throated Hummingbird Migration time 2018 is happening now.  They are heading northward with sightings in the more southern states of Texas, Florida, Louisiana, Mississippi, Alabama, Georgia, South Carolina, Oklahoma, Arkansas, Tennessee, and North Carolina, and one so far in southeast Kentucky (my home state).

Last year (2017) I noted that it was May 8th when I saw my first hummer and in 2016 it was on May 1st.  But I have seen them as early as April 20th too so it all depends on food and weather (according to the experts).  For this reason I usually put my hummingbird feeder up by the end of March so that I am ready for them.  See Map below from Hummingbirds.Net for the Spring 2017 Migration times for your neck of the woods.    You should have your feeders up one to two weeks prior to this but anytime will do, however, you just might miss a few.

Males are the first arrivals so they can set up their territories, then the females follow about ten days later.  These hummingbirds usually arrive along the gulf coast by early to late February, after a long, exhausting journey (about 500 miles) from Central America or Mexico where they stay during the winter season.  From the Gulf Coast they will migrate to their summer breeding grounds traveling an estimated 20 miles a day generally returning to the same place that they were hatched (so the experts say).

When you first see one you can report it HERE.   Hummingbirds.Net is where people report their first sightings of Ruby-throated Hummingbirds to keep other people informed and on the look out.   It’s a great way to keep up with current reports on the migration.   Here’s their current 2018 Map as of this writing:

How To Attract Hummingbirds

Obviously hummingbird feeders are a good way to attract the Ruby-throated Hummingbird to your yard especially in the spring when many of their favorite flowers haven’t started blooming yet.  Below is the best hummingbird juice recipe:

We usually make a double or triple batch and keep in the refrigerator so that we can replenish as soon as a feeder is empty.

Do Not Use the store bought nectar that has the Red Dye or add red dye to your recipe.  Reports have shown that it can be harmful for the hummingbirds plus there is no nutritional value in it.  Don’t worry, hummingbirds will be attracted to the red or yellow flower on your feeder.

You should change the water in your feeder if you see that it is cloudy or discolored especially in hot weather.  Sugar water will ferment pretty fast and that is not good for the hummingbird.  Of course if you are lucky enough you won’t have to worry about that because you have so many of these flourescent beauties drinking your juice that you just can’t keep up with them ;-).

Another way to keep them coming back is to have flowers that attract them.  Brightly colored flowers which hold the most nectar are the best ones to have.  These include bee balm, cardinal flower, columbines, honeysuckle, jewelweed, daylilies, lupines, dianthus, lavender, foxgloves, hollyhocks, cleomes, impatiens, superbells, and petunias just to name a few.  See my Top 10 Flowers Here.

There are also bushes and shrubs that will attract them too:  butterfly bush, spirea, potentilla, bluebeard, viburnum, rose of sharon, crape myrtle,  summersweet, and hydrangea.

In case you were wondering where you might find the  Ruby-throated Hummingbird, it can be found in the eastern half of the United States and Southern Canada.  You will find them in open woodland areas, forest edges, meadows, orchards,  and also in your own garden especially if you have flowering plants that attract them.    Hummingbirds like to feed on these flowers for their nectar and they also like the sap from trees.  They also feed on insects such as mosquitos, fruit flies, gnats, and spiders.

If you don’t live in the eastern half of the United States or South Canada you may still be able to get hummingbirds just not the Ruby-throated.  For example in the Southeast Arizona area there are quite a few different species to see.   Some of these same species of hummingbirds can also be found from California up to Washington State.   Check out my post HERE. 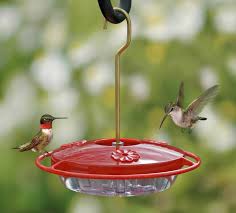 It won’t be long and our gardens will be blessed with the presence of the Ruby-throated Hummingbird again.   Make sure that you have your hummingbird feeders up for their arrival so that you don’t miss them when they arrive.  Otherwise, you may have to wait until your flowers come in to bloom to be able to see one as they like to feed on the nectar.

As you can see I am just a little excited about the return of the Ruby-throated Hummingbird.  The beautiful irridescent little birds with their bright red throat that you see zipping around your garden as they fly from flower to flower feeding on nectar.  Or you will see them hovering at your hummingbird feeders to get a drink of your home made nectar.  Now that’s a treat that they will surely like and want to keep coming back to!

Have you seen the Ruby-throated yet this spring?  Please let me know as I would love to hear from you.  Make your comments below.  Thank you and…..