It is a guarantee every time I travel on an expressway especially in winter.  A large bird perched high up on a telephone pole, post, or tree watching over an open field.  Not just one but there will be several of them spotted along my drive.  It stands anywhere from 18 inches to 26 inches depending on the sex of the bird.  It has a pale streaked underside with brownish feathers for the outer parts of its body and a broad red tail (outer part) where it gets its name.  Have you figured it out yet?  It is the most common hawk in North America…a Red-tailed Hawk.

Of course you do not have to travel on an expressway to see this beautiful hawk because you may see them anywhere there is open land such as a farm or field.  This is where they hunt for their food. 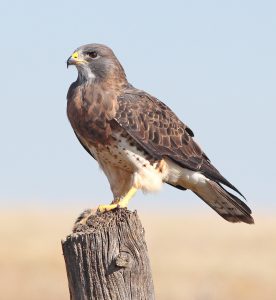 Are There Red-tailed Hawks In Your Neck of the Woods?

If you live in North America then you probably have Red-tailed hawks near you.  They are the most common hawk out of 17 different species found in North America.  Red-tails live here year round too.

Just look for broad, rounded wings with a short red broad tail.  You generally will not see them in your backyard unless it is a big open area such as a farm where they can feed. 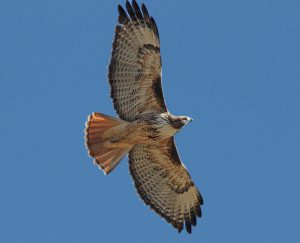 What Do They Eat?

Red-tailed hawks feed mostly on mammals such as voles, mice, wood rats, rabbits, snowshoe hares, jackrabbits, and ground squirrels. However they will also eat birds such as starlings, blackbirds, pheasants, and bobwhite as well as frogs, toads, snakes and even decaying animals.

You will either see them perched high on a post, tree, or pole or they will be flying above open fields moving slowly in circles searching for their next meal.   They will attack their intended target with a controlled dive with outstretched legs.

In the springtime around March (March through May is breeding time) both the male and female build a nest high above the ground up to around one hundred and twenty feet or more.  It consists of many layers of sticks and some added grass or moss type materials.    The female may lay up to five eggs with two to three eggs  being the normal.  Both sexes incubate the eggs which takes about four to five weeks.  The female remains on the nest in the first few weeks while the male hunts for food bringing it back for the female to break up for the young.  Eventually after a few weeks food is dropped into the nest for the young to feed on their own.  The young will leave the nest after about six or seven weeks.

Usually around late May or early June I start to hear that high pitched and rapid, screechy call and know that the young Red-tails are out and about making themselves known.  It always makes me smile. 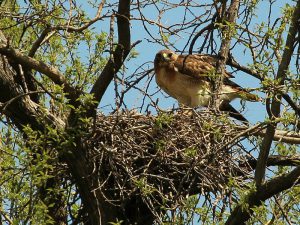 The next time you are traveling along the highway or maybe even in your own neighborhood, look out for the Red-tailed hawk either perched high up in a tree, on a post or telephone pole, or just soaring around in slow circles hunting for its prey.  A good vole, rabbit, mouse, ground squirrel or bird will do for dinner but it could also be in the mood for a starling, blackbird or pheasant.  It all depends on what is available at the time.

Red-tails are quite abundant during the winter as they migrate short distances from up north where food may be more available.  However, you can spot them any time of the year.

There are 17 different species of hawks in North America so if you see a hawk make sure it has the notable red tail and pale, streaked breast along with brownish upper feathers to call it a Red-tail.

I have even seen Red-tails sitting on guard rails close to the ground so just be on the look out.  I am sure you too will spot one or two or three in your neighborhood.  You just never know.

Have you seen a Red-tailed Hawk near you?  Feel free to comment below.