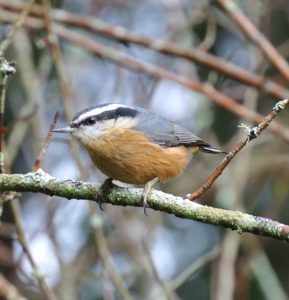 Did you know that it  an irruption year for the Red-breasted Nuthatch.  This nuthatch species generally stays up north where they breed and live all year but when food supplies (conifer seeds) are low they migrate south (maybe hundreds of miles) for the winter.  How do I know?  The first clue was when my husband and I saw reports last October  by other birders, claiming that there were great numbers of these birds  being spotted everywhere.   The second clue was/is the fact that we have had three Red-breasted Nuthatches enjoying good food at our backyard feeders every day since November.  That is when they first arrived here in Kentucky or at least at our place.  They are usually right outside our deck door at the suet feeder, on the regular seed feeder down below, or darting around the river birch next to our deck.

Last year we didn’t have any at all and the year before that we had maybe one or two.  It is never predictable.  One year you may have an irruption of them and then not have any for a few years.  So it is always a pleasant surprise when we get them as winter visitors.

There are other bird species that do this too.  Pine Siskins, Purple Finches, Red Crossbills, White-winged Crossbills, Grosbeaks, Snowy Owls, and a few other species are known to have an irruption year periodically.  It is when food is more scarce or there is an over population of these birds.  So they move southward for better supplies.

Pine Siskins and Evening Grosbeaks have also been reported as having an irruption year this year.   While we did get quite a few Pine Siskins visiting our feeders this winter they did not stay like the Red-breasted Nuthatch.  However, periodically we spot one or two feeding at our feeders.

Red-breasted Nuthatches can be found in the northeast and western United States, at high elevations around Tennessee, in Canada, and in Alaska.    This nuthatch prefers mature forests with conifer trees as they feed mostly on conifer seeds.  During the summer months they also feed on spiders, beetles, ants, flies, and caterpillars. 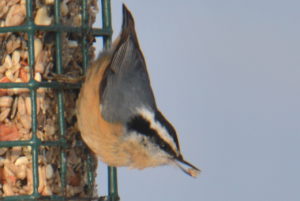 While this nuthatch does prefer the evergreens we do not have any in our yard.  I do believe that it has to do with the bird food that we offer which includes black oiled sunflower seeds, peanuts (not in shells), and suet.  They love it!

How can you identify this bird?  Look for the high energy bird that moves around rather quickly as it creeps up and down and sideways on the tree trunk.  It is about four and a half inches long with a black and white striped head, a white neck, slate-blue wings, and a cinnamon-colored underside.  Compared to the White-breasted Nuthatch it is about one inch smaller.

Fun Fact:  One thing that I have noticed about the Red-breasted Nuthatch is that it has no problem coming in close to humans unlike the White-breasted and many other birds.  When I am out replenishing feeders it stays close by just waiting for the food while other birds will high tail it out of there until I am finished.

Nesting usually occurs from late April to mid August.  Red-breasted Nuthatches are cavity nesters building their nests usually in dead trees.  The male and female both build the nest with the female doing most of the work.  Nests are made out of grass, moss, feathers, and other plant materials.

Red-breasted Nuthatches will use the sap from conifer trees (very sticky substance) to line the entrance to their nesting hole which helps to keep predators from getting in.  The male and female nuthatch are able to just fly straight in to avoid the sticky stuff.

Five to six eggs are laid with incubation taking about twelve days.  Both male and female feed the young who will leave the nest at about twenty one days.

How To Attract Red-breasted Nuthatches To Your Yard 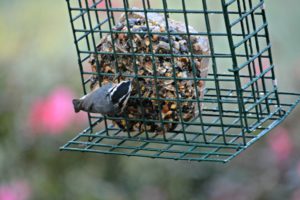 To attract this fun bird to your feeders be sure to put out suet that contains peanuts, peanut butter, and/or  black oiled sunflower seeds.  You can also include sunflower seeds and peanuts in your seed mix for your regular feeder.     They will come in to both but more regularly at the suet feeder from my experience.

Conifer trees are a plus but if there are none in your backyard,  they will gladly come in if there are only deciduous trees around especially if you have good food for the taking (i.e. see paragraph above).

All birds like places to escape from the cold and blustery weather and also from predators.  So shrubs, hedges, and underbrush, are good for that.  AND….don’t forget a water source.  Birds need water all year long.  We have a heated birdbath that can withstand temperatures to around zero degrees or a little below.  The water does not freeze and the birds are always readily available to take a drink too.  The good thing about this heated birdbath is that all you have to do is unplug it during the warmer summer months.  No need to have two separate birdbaths or use a heater that only works to certain temperatures and gets iced up.

Red-breasted Nuthatches may be in your own backyard this winter.  With this being a big irruption year it is highly likely that you can attract one or two or more to your backyard feeders.  Look for the high energy bird moving up-down-sideways on your tree trunk or feeding at your feeder that contains seeds, unshelled peanuts,  or peanut butter.  They seem to frequent the feeders so you really cannot miss one if it is out there.

They are the cute bird with a black and white head, slate blue wings, and a cinnamon colored breast.  The “red” in the name is kind of deceiving as cinnamon is more fitting to me.

If you happen to have any this winter, I would love to hear from you.  Where do you live and how many do you have this year?

Also, if you have any other comments about this post please feel free to make them below.