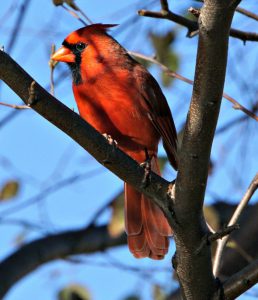 My niece posted on Facebook not long ago about how she saw a “red bird” in her yard and that it was a definite sign that her grandma (my mother) was watching over her.  There are those people who believe that red birds are  a representative of people who have died.  I guess it also helps knowing for my niece that my Mother absolutely loved these birds.

Native Americans claim that if you see a red bird (i.e. a cardinal) you should expect good luck to follow in the next twelve hours, twelve days, or at midnight.  The number twelve is a lucky number by many Native American tribes.  That sounds good to me as I see Cardinals in my backyard every single day so I should be having continuous good luck in my life.  :-).

Red birds are actually Northern Cardinals or just plain Cardinals as I prefer to call them and can be found in the Eastern United States and Southern Canada down to Mexico, Belize, and Guatemala.

About The Northern Cardinal 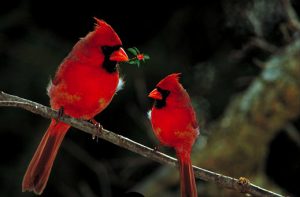 You can’t miss this bright red bird especially in the fall and winter months when they are perched on bare trees or even better, on a snowy day with their beautiful red coloring standing out in the white glistening snow.  That is always a beautiful sight!

The habitat for Northern Cardinals is along woodland edges, suburban backyards, towns, parks, thickets, or anywhere there are dense bushes for nesting.

Cardinals feed in summer on insects such as beetles, grasshoppers, caterpillars, ants, flies, and also spiders and berries.  In winter they feed on weed seeds, berries, and will come in to your feeders for sunflower seeds but will also come in to your suet feeders.   They do like to perch while feeding so a platform feeder or hopper style feeder are ideal for them.

It is always funny to me when someone identifies a bird that they see as a “red bird” because there actually are other birds that are also red.   So I always have to ask them to be more specific about their description.  Below are a few more birds that are also mostly red in color.

Scarlet Tanager – the Scarlet Tanager is a summer resident in eastern North America.  The male has a brilliant red coloring with black wings and tail.  It is a must see for sure.

House Finch – is found pretty much throughout North America all year long.  In the summer the males are a rosy red on the upper part of its breast with streaks of rosy red on the rest of it.  During the winter months they are duller in color.

Purple Finch – they breed in Canada and winter in the Eastern United States.   Always a welcome winter bird at our feeders.

Pyrrhuloxia – this bird has red on its crest and on the wings and breast.  It looks a lot like the female Cardinal and can be mistaken for one sometimes if you do not know your birds.  They are found in the southwest and Mexico.

Red birds or Cardinals as I prefer to call them, are always a welcome sight in everyone’s backyard.  The male’s bright red coloring especially, can be beautiful to see all year long and especially in winter against the beautiful white snow.   Lucky for us this bird is a year round visitor since this bird does not migrate.

Some people believe that when they see one that a loved one is watching over them.   Native Americans believe that if you see one then good luck is coming your way.  Either belief is a nice thought if you ask me.

Just remember though that there are other birds that could fall into the category of a “red bird” so think about that when you are describing one to someone.  Yeah, most likely they will know what you are talking about but you just never know ;-).