Finally last weekend in Sax Zim Bog, Minnesota I was able to see a Pine Marten.   Just like last year my husband and I traveled there from our home in Kentucky (twelve hours) to go birding in the bog and to hopefully spot other wildlife that this amazing place has to offer.  Unfortunately, we did not get to see the elusive Pine Marten our first trip.  That was a bummer.

But….not this year!  It was truly a sight to see too. 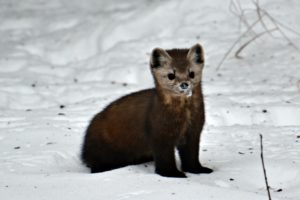 In the following paragraphs I will provide you with some Pine Marten facts but first let me give you a little bit of background about the famous Sax Zim Bog (a magical place….as some people call it).

Where is Sax Zim Bog?  Sax Zim Bog is located in Toivola, Minnesota which is about fifty miles north of Duluth.  That is where we usually stay and it is only about a half hour drive from there which is not too bad.  Of course you can stay closer if you want it really is up to what you want in accommodations.

The Bog covers about 200 square miles and is part of the Lake Superior Watershed.  Farmland, sedge meadows, hay fields, lakes, and streams make up the bog along with  evergreen and spruce trees, pines, aspens, and birch trees.  This type of habitat makes it ideal  for wintering boreal birds and a number of must see mammals (i.e. Pine Martens, bobcats, moose, fishers, deer,coyote, wolves, snowshoe hare, fox, and more). 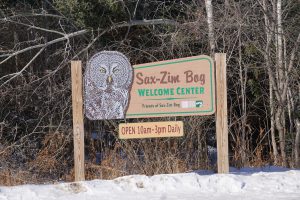 Now about those Pine Martens…… 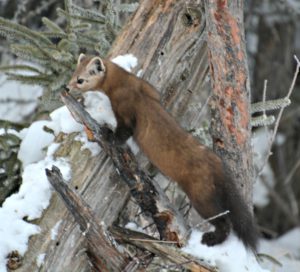 Also known as American Martens, this cat size mammal is mostly nocturnal.  It has light to dark brown fur,  a cream colored throat, and a bushy tail.     They have a long slender body which can be anywhere from twenty five to thirty inches in length and weighing in at about three and one half pounds. During the winter months their fur grows longer and silkier to be able to withstand

They live in coniferous and mixed old forests that have a thick canopy.  This is because there are likely more dead trees with hollows for finding shelter and food.

NOTE:  The best place to see a Pine Marten in Sax Zim Bog where we were able to spot one is on Admiral Road.  There is a certain spot that has stocked feeders placed out for the birds  as well as peanut butter spread in different spots to attract the martens.  Periodically you will see one come out of hiding to get a bit to eat. 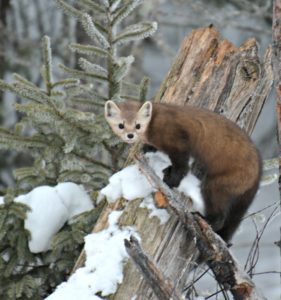 Pine Martens are omnivores and will eat voles, mice, birds, red squirrels, rabbits, reptiles, carrion, and also like honey, insects, worms, eggs, and berries.  Apparently, they also like peanut butter too.  They are fast moving and will kill their prey with a powerful bite to the back of the animal’s neck.

They do their hunting mainly on the ground at dawn and at dusk.  It is interesting to note that while my husband and I were in the bog the snow was a few feet deep.  We had to stay on the road because we would just sink down in the snow if we didn’t.  It was up way past my knees and not easy to walk in as you can imagine.  But the Pine Marten had no problem in the snow, in fact it traveled very easily across it.  How was it able to do this?  Pine Martens have big furry paws that help to distribute their weight which helps them to run on top of snow instead of sinking into it.

Breeding season is from June to August with young being born the next spring around April.  Up to five babies, called kits, may be born.  The young will drink their mother’s milk for up to forty two days.  Within three to four months they will be as big as their parents and are able to kill their own prey.    They are fully independent at six months.  At twenty four months they will reach maturity.

Predators of the Pine Marten

Pine Martens may be preyed upon by foxes, eagles, wolves, and wildcats such as bobcats.

Pine Martens can be found up north in Canada, the northwestern United States, in the Rockies, as well as in New England.  The first and only time that I have seen one was in Sax Zim Bog, Minnesota this year (2019) on a birding trip and it was in the early morning hours.

Other people that I know who live in Canada say that they get martens all of the time in their neck of the woods.  And….I do mean woods as they prefer a habitat of mature woods mixed with pines, where their name comes from.

They are mostly nocturnal so they can be hard to find.  In the bog people put out peanut butter (any kind) which definitely attracted them in  and only periodically.   It seemed that the main times were early in the morning when we saw one or later in the day closer to sunset.  However, there were times that it made a showing around lunch time too (go figure).

It was definitely a great sighting on our birding trip which made it all the better.  You cannot beat seeing five species of owls (Great Grey, Snowy, Northern Hawk Owl, Great Horned, and Barred), seventeen other species of birds, deer, and a Pine Marten.  We also found a place where bobcats were living (learned through the grapevine) but never got to see any.  I have seen bobcats before out west, but not in the bog.  Darn!  Maybe next time…

How about you?  Have you ever encountered a Pine Marten?  I would love to hear where and about your experience.  Or if you have comments about experiences in Sax Zim Bog.  Please feel free to do so below.