My sister sees one all of the time from her high rise window at work in the downtown area.  The Peregrine Falcon has a hankering for pigeons and she will see them swoosh past her window going for its intended meal.  This bird can capture a bird in mid air at speeds of up to 240 miles per hour.  I’m not sure if my sister spots them going at this particular speed but nonetheless that is amazing if you ask me.

You see the Peregrine Falcon is considered the fastest bird in the world.  The next fastest is the Golden Eagle going at top speeds of 200 miles per hour.   You  may be able to spot a Peregrine in your own city as they have adapted well to large city areas.  Why?  Because in most large cities you will find pigeons which is their favorite bird to eat.  Peregrines eat other birds too such as mourning  doves,  shorebirds, waterfowl, ptarmigan, grouse, and smaller songbirds such as jays, buntings, larks, waxwings, and starlings. 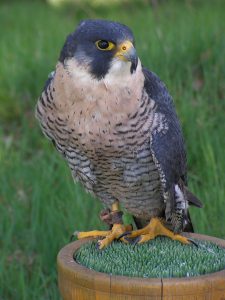 How To Identify A Peregrine

The Peregrine Falcon is a bird of prey.  It has dark blue-gray wings that are barred underneath, a light colored spotted underside, barred tail and legs with thick orange talons and a hooked beak.   You will note a blue-gray wide streak reaching from each eye to its neck.  They stand 15 to 21 inches with a wing span of three and a half feet.

Peregrine Falcons can be seen on every continent with the exception of Antartica.   Look for them on high perches such as bridges (where we usually see them), on skyscrapers, high towers, near power plant towers, and on cliffs.  They can also be found in the desert, on the tundra, and in the tropics. 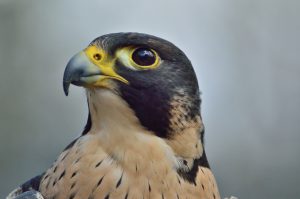 OTHER FACTS ABOUT THE PEREGRINE FALCON

In summary, the Peregrine Falcon can obtain speeds of up to 240 miles per hour as it dives for its favorite food…the pigeon.  It also likes to eat mourning doves, shorebirds, waterfowl, ptarmigans, grouse, and smaller songbirds such as jays, starlings, waxwings, larks, and buntings.

Peregrines have adapted to living in urban cities where pigeons and doves are abundant.  You may find them on top of tall buildings and ledges watching for their next meal.  They also like to hang out on high overpasses such as bridges, up on water towers, power plants, and on cliffs.  Look for the dark grey bird about 15 – 21 inches with barred underparts and legs, a dark grey wide streak that extends from its eyes to its neck, orange talons, and a hooked beak.

They usually can be found in the same general area year after year too.  We know if we go downtown to watch in a certain spot we may see one.  There is also a bridge connecting to Ohio that we always check for one as we often see one there too.

Some states have set up webcams to watch the nests of Peregrine Falcons.  You  may want to check your own town to see if they have one.

Have you ever seen a Peregrine Falcon?  If you have anything you would like to add to this feel free to make your comments below.