Owls have always fascinated people, including me,  with their eerie sounding calls that they make at night and the way they quietly fly through the woods coming just inches from their prey without even being detected.    There is such a mysterious way about them the way they turn their heads at 270 degrees and the way their eyes seem to stare at you.

The first time that I encountered an owl I had just moved to a house located in a wooded setting (on 6 1/2 acres) where our house was completely surrounded by trees.  I was sleeping in my bed that first night and all of a sudden I heard the creepiest sound that I have ever heard.  I sat up in bed, my husband later tells everyone,  with my eyes wide open looking straight ahead and feeling very spooked!  Later after a little investigation we learned that it was a Barred Owl.

After living at our new house for a while we learned that the Barred Owl wasn’t the only owl that would visit our woods.  The Great Horned Owl made itself known too and so did the Eastern Screech Owl that made an eerie whinnie sound with its long tremulous trill that seemed to last a long time.  This wasn’t just at night.  Sometimes we could hear it in the daylight hours too.

These are not the only owls that are around either.  My husband and I soon discovered that there are other species of owls too.   Let me introduce you to them:

The owls of North America  are  made up of 19 different species, some of which can only live in certain habitats while others can adapt to different landscapes and are quite able to survive.  Some of these owls hunt in the daytime but most of them hunt at night.  What do they eat?  They mostly feed on small mammals often swallowing them whole.  Their dinner may be mice, rats, moles, squirrels, rabbits, and skunks but some also eat  insects, worms, spiders, frogs, lizards, and small birds too. 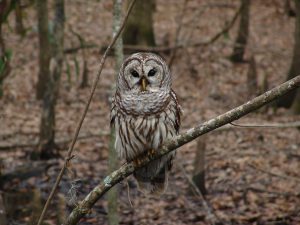 #1 Barred Owl –  has a large round head with large black eyes, brown streaks on its belly and white mottling above.  These owls are found in the Northeast and Canada and live in large, mature forests made up of deciduous and evergreens, often near water living in tree cavities.  They generally roost during the day and hunt at night.   However, I have heard them calling in the daylight hours making their “who cooks for you”  sound and have also seen them hunting too.  This is usually when they are raising young though. 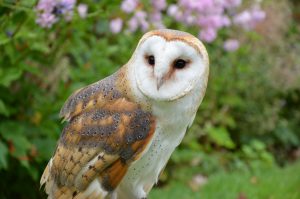 #2 Barn Owl –  is one of the most widespread land birds and found on six continents and many islands.  It can be found in woodlands, groves, farms, barns, towns, or cliffs typically in open or semi-open country.  They may also be found in the city if there are nearby farmlands, prairies, or marshes nearby.  Their call is not like a typical owl but a long, harsh scream lasting for 2 seconds or more.  I have heard them in the middle of winter in the woods where we used to live and it is a pretty distinct sound that you will not miss. 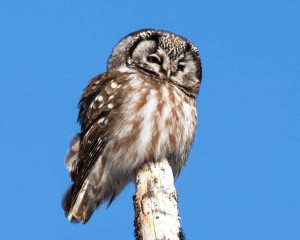 #3 Boreal Owl – is found in dense northern woodlands with a mixture of conifers such as spruce or fir trees and deciduous trees like the aspen and birch in the highest elevations of the mountains in the United States.  This smaller owl can capture prey hidden under snow or under dense vegetation. 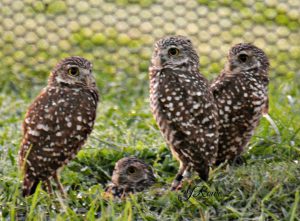 #4 Burrowing Owl – can be found  in open landscapes  such as grasslands or any open dry area that has low vegetation even golf courses and vacant lots.  This is a small owl with long legs residing  in the western United States, hunting usually at dawn or dusk but have been seen during the daytime hours.  They are also found in South America. 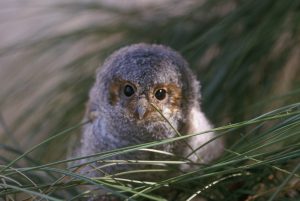 #5 Flammulated Owl – is a small owl found in mountain pine forests that has ponderosas, oaks and aspen trees with brushy undergrowth in the western United States at elevations up to 10,000 feet.  It feeds mainly on nocturnal insects and spiders. 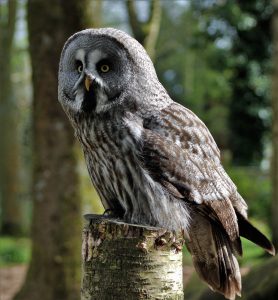 #6 Great Gray Owl – documented as the world’s largest owl at 22 inches in length with a wing span of 3 feet and found in the far north and certain high mountains of the west.  It is a nomadic owl that has no regular migration.  It moves in large numbers going south or southeast when there is a sudden drop in rodent populations.   Minnesota would be the most southern these owls will go.  They are also found in the Eastern and Western Hemispheres.

#7 Great Horned Owl – is a very adaptable owl found to be the most widely distributed throughout the United States.  This is a large owl up to 24 inches with a wing span up to 2 1/2 feet.   You will see these owls pretty much everywhere from the suburbs and parks to forests and deserts.  Their call is a deep, soft, stuttering rhythm of  hoo-h’HOO-hoo-hoo that you can’t mistake once you have heard them before.  I have had Great Horned Owls on my roof in my subdivision calling early in the morning. 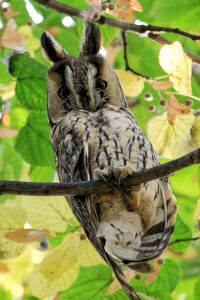 #8 Long-Eared Owl – live in open woodlands, forest edges, along the river banks,  hedgerows, juniper thickets, woodlots, and wooded ravines and gullies in much of the United States, Canada, Mexico, and as far away as Japan. 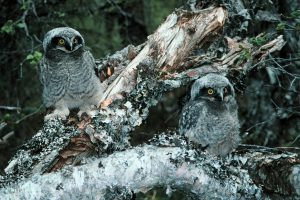 #9 Northern Hawk Owl – is found in Canada and does not really migrate unless food is scarce.  This particular owl hunts only during the day in open conifer and spruce forests with aspen, and birch around edges of clearings or burned areas. 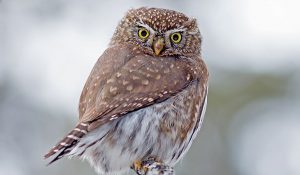 #10 Northern Pygmy Owl – this owl hunts during the day on songbirds mostly and is found widespread in the mountain forests of the western United States.  They have also been known to come in to bird feeders where songbirds may be.  They are small and the best way to find them is by listening for their high, evenly spaced hooting calls. 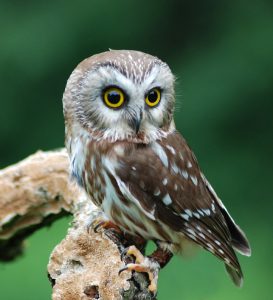 #11 Northern Saw-Whet Owl – lives pretty  much throughout the United States and Canada living in forests, conifers, and groves.  This is a hard owl to find unless it is in the breeding season where you might hear a male making a rhythmic tooting song that continues for hours without much of a break.

#12 Short-Eared Owl – is found on all continents with the exception of Antartica and Australia on prairies, marshes, dunes and tundra.  You will see this owl feeding during the day but mostly at dawn and dusk.  Its call is a variety of barks, hisses, and squeals. 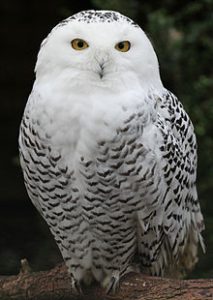 #13 Snowy Owl – native to arctic regions in North America and Eurasia.  Males are almost all white while the female has some streaks of color so they are pretty obvious when you see one.  They feed in windswept fields or dunes on lemmings mostly but will eat many other rodents.  They often perch on rises such as the crests of dunes, on fence posts, telephone poles, and hay bales.

#14 Spotted Owl – lives in old growth forests in Western North America, British Columbia, and in the canyons of the Southwest.  They mostly eat small rodents such as flying squirrels and wood rats.  It has a deep hooting call. 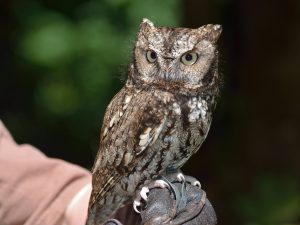 #15 Western Screech Owl – a small owl native to the Western United States, Canada, and Mexico.  They hunt in woods and the desert feeding on crayfish, rats, and bats.  This owl can be found in residential areas and parks in a wooded setting too.  Their call is a “bouncing ball” call.

#16 Eastern Screech Owl – is a small owl of the Eastern United States, Canada, and Mexico.  Its call is a whinnie or soft trill.  They can be found in woodlands, farm groves, among shade trees in residential areas, parks, and dense forests. 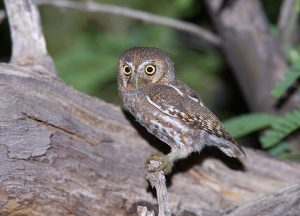 #17 Elf Owl – breeds in the Southwestern United States and Mexico.  No bigger than a sparrow it is considered the tiniest of owls in the world.  They live around abandoned, north-facing woodpecker cavities in saguaro cacti, sycamores, cottonwoods, and other hardwood trees. Their call is a mew, mewing noise.

#18 Whiskered Screech Owl – found in the mountains of the Mexican border around mainly oak woodlands.  This owl resembles the Western Screech Owl but is somewhat smaller.  Feeds on mostly large insects but may also eat small rodents.  Its call is a trilled song with change in pitch at the end having long and short notes. 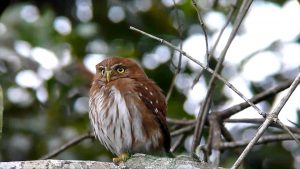 #19 Ferruginous Pygmy Owl – found in south-central Arizona in the United States, south through Mexico and Central America, to South America into Bolivia, Paraguay and Argentina.  It is a widespread bird of the neotropics found in arid scrub, dry forest, evergreen forests, coffee plantations, and even towns.  It feeds on large insects and small vertebrates.  Its call is a series of short whistles.

Some Interesting Facts About Owls

Owls are a fascinating bird seen mostly at dawn or at dusk feeding, but some can be seen during the daytime hours too.  The Barred Owl, Burrowing, Snowy, and Screech Owls are a few examples.

I myself have seen 11 out of the 19 species of owls that are found in  North America.  They are the Barred, Barn, Burrowing, Great-Horned, Northern Saw-Whet, Eastern and Western Screech Owls, Snowy, Short-Eared, Long-Eared, and the Elf Owl.  Some of them were in my own backyard, some were seen on vacation in the southwest United States, and some were a trip bird (traveling just to see the bird)  such as the Snowy Owl.

The best way to find an owl is to be observant when you are walking in the woods or in your neighborhood.  Sometimes all you have to do is hear their “hoot, hoot” type sound to find one and sometimes you may just see them roosting in a pine tree, in a tree cavity, or on top of a telephone pole.  Sometimes you may even hear a bunch of  birds carrying on around a particular tree; where if you investigate the problem you will find an owl (it could also be a hawk too).  The other birds do not like owls around because they are its prey so they try to scare it away making  a lot of noise trying to bully it.  It’s always better in numbers when you are the smaller bird you know.

This is a great book on the Owls of North America that is very informative and has great photography.  It will provide even more information about owls, their behaviors, and where to find them.

Have you seen any owls lately?  I would love to hear about your experiences.  Feel free to leave your comments below.