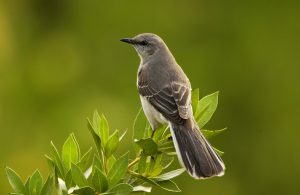 I was walking at the park today with my little Millie, a Yorkie, and thought I heard a Blue Jay.  I started to look around for it but then instantly I heard an American Robin’s call and immediately following that was the call of a Red-winged blackbird.   That’s when I knew it was a a Northern Mockingbird.  I should have known, there is a pair in this particular spot on the walk hanging around all of the time.

I always smile when I hear a mockingbird because they remind me of someone who likes to be the center of attention, always making themselves known with all of their chatter.  This long, slender bird with its long tail and greyish, brown upper feathers and pale body is chatty just like that.  It will call all day making up to 15 different sounds or more mimicking not only other bird’s calls, but also other animals such as dogs, cats, frogs, and even crickets.

The interesting thing about this bird is that it imitates the calls of birds and animals that live around it.   So if the mockingbird resides with a different set of birds you will hear him mimicking them.

Where Can You Find Mockingbirds?

The Northern Mockingbird can be found throughout the United States, in Mexico and some parts of Canada. You will see them in your own backyard sitting high up in the trees, on a fence post, or up on a utility line usually singing very loudly.  Mockingbirds can also be seen on the edges of forests, in parks, in the city,  and in fields too. 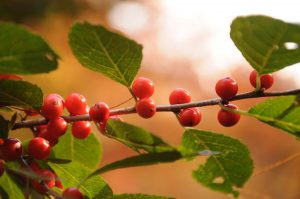 The Northern Mockingbird is an omnivore.  It eats berries, fruits such as tomatoes and apples,  earthworms, beetles, ants, grasshoppers, and spiders.  Mockingbirds will come in to your feeder if there is suet, peanuts, raisins, apple slices, or currants.  I have also seen them come in for seed in the dead of winter when there is snow and/or ice on the ground.  They like to harass the other birds trying to keep them off of the feeder.

Interesting Facts About The Northern Mockingbird 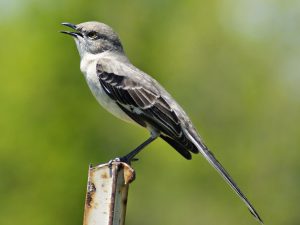 If you hear a noisy bird perched up on a telephone wire making all kinds of noisy sounds it probably is the Northern Mockingbird.  There is no way to miss this bird as it can mimic up to 15 or more different sounds in a row.  Some of which are those of other birds that live in the surrounding area and some of which could be the sounds that a cat, dog, or even frog makes.

Both the male and female sing but the male is the loudest.  That is because he is the one attracting the female and if he doesn’t attract one he may call all day and all night.  In addition to that, in its lifetime it can learn up to 200 songs throughout its life.

Keep an ear out when you are out in your yard or taking a walk because they are an entertaining bird!

If you want to learn about the Northern Mockingbird or any other bird species in North America try this book.  It is a great field guide.

Have you heard the mockingbird sing?  If you would like to make a comment please do so below.