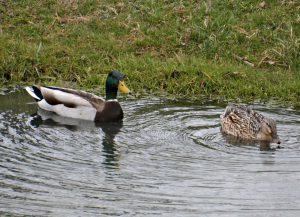 It’s a sign of spring for me when I see a pair of Mallards hanging around our pond.  You can see them paddling in the water together, feeding on the vegetation together, and taking walks together around the pond.  I am not sure if they have a nesting spot yet but it sure seems like they have decided on a place in my neighbor’s yard somewhere.  You see I have observed this couple waddling up the grass towards his house quite a few times.  I’m thinking that the nest may be under his bushes on the ground somewhere as that is the Mallard Duck nesting habit.  The female will build a shallow bowl type nest using the plant materials around her.  The nest is usually on the ground and hidden under vegetation so predators can’t find it.

That’s what Mallards like to do.  They will seek a good nesting spot which can be up to a hundred yards away from water.  Water as in a pond, a marsh, a stream, or lake.  In my case it is our pond which has been the breeding grounds for a number of Mallard pairs over the years as well as Canada Geese (but that’s another story).

It can be a lot of fun watching the ducklings as they follow their mama (hen) around in the water and in our yard too.  It can also be very painful to watch sometimes.    When my husband and I first see them we take a count of how many ducklings there are (can be up to 12) because as the days go by this number will probably drop quite a bit due to predators.  Predators such as raccoons, hawks, and snapping turtles who swallow them whole in the water.  I know, it sounds terrible but unfortunately it is a natural occurrence in nature.  As long as I do not witness it, I can handle it.  Don’t get me wrong, it is still sad to see the hen walking around looking lost when she loses one of her babies.

In the end there may be about four or five of the ducklings that survive.   Sometimes more, sometimes less. 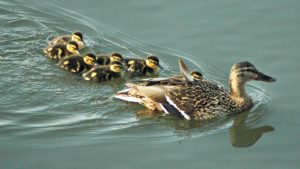 Where Are Mallard Ducks?

Mallard Ducks can be found throughout the Northern Hemisphere.  They are the most familiar and most populous one that you will see around.  Find them on ponds, lakes, rivers,  in parks, and in your own neighborhood.

You will be able to identify the wild Mallard Ducks over the domesticated Mallards by the way they react to your presence.  Wild Mallards will fly away almost immediately within a human’s presence while a domesticated one will walk right up to you looking for food.  For this reason, not all parks want you to feed them.  They want the birds to stay wild which is really as it should be because parks can become overpopulated with them.

Mallard Ducks eat mostly aquatic vegetation.  You will see them duck their head underwater with their butts in the air as they feed on pond weed.  They will also eat  insects, worms, fish, grass seed, wheat and corn.

You may see Mallard Ducks in your own backyard, at your local park paddling in the lake, or just about anywhere.  This duck is the most well-known and abundant in the northern hemisphere.  Some are wild ducks, some are hybrids that have mated with other species, and some are domesticated…being very comfortable with humans.  You will know the wild ones as they do not let you get too close to them and fly off to another location.

Males and females get together in the Fall and stay together until breeding time in early March and up until late May.  The female is the only one who incubates the eggs and also raises the young.  The male leaves about ten days after incubation time and will gather with other males for the summer months.

Once the babies hatch the mama takes them to water to teach them to swim.  The new hatchlings will follow her for the next fifty or sixty days when they are able to take care of themselves.  Then they are on their own and will leave the area.  However, I have seen a family that we had return to our pond.  How do I know?  Well, I could be wrong but it was the fact that it was the same number of ducks that just left a few months prior and after observing them for a few months around the yard and pond you just know.  They are like family ;-).

Do you have Mallard Ducks where you live?  What is your experience with them?  Please feel free to make your comments below.