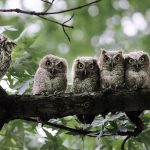 A few years ago  (back in the stone age when cell phones did not come with cameras) I lived in Ohio on six and a half acres on a wooded lot.  My husband and I were relaxing out on our second story deck which was right there among the trees.   It was a great place for birds as you can imagine.   It was evening and starting to get dark and music started playing from a nearby park that was having a summer concert.  What more could you ask for except maybe a nice cold beer to go along with it.

As the music picked up beat on this one song (I really do not remember what the song was) along comes four young Eastern Screech Owls.  They flew in and sat on a tree limb almost right above us sitting next to each other and just swaying to the music in unison.  I would have loved to have had a video camera handy to video this fun and unusual site.  It would have been proof to some unbelievers that it really did happen.

The Eastern Screech Owl is a robin-sized owl and  is common over much of the east.  Not only are they found in most types of wooded areas like where I lived but also in city parks and shady suburbs.  This owl spends the day roosting in holes (such as a tree or a nesting box) and also in dense cover.  They become more active at dusk.  Their voice sounds more like a whinnie or even pitched soft trill and may sound kind of spooky to you.

So if you hear something like this while you are out in the evening it may be the Eastern Screech Owl.  It is just calling out to its family or defending its territory.   It may even be swaying softly in some tree to some funky beat.