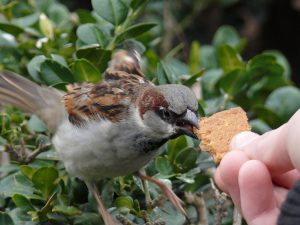 Some people think of sparrows as that annoying bird that makes a lot of noise and that eats anything it gets its beak on.   This is actually the House Sparrow which is the most widespread and abundant sparrow throughout the world.  It survives practically anywhere in a city but can be found in rural areas too.  It is a tough, adaptable, and very aggressive bird, that competes for food and likes to evict other nesting birds off of their nests.

This is the bird that I was accustomed to seeing when growing up.  An ugly brown and grey looking bird that is mostly found around houses or other buildings always making a lot of noise…cheep, cheep, cheep.  It is the bird that is always present when you are eating outside, who sit closely nearby just waiting for crumbs that you may drop on the ground or for handouts that you give them.

But did you know that House Sparrows, while a common bird here, are not related to North American Sparrows at all.  They are actually a native of Eurasia and northern Africa.  They were first introduced in New York around 1851.  Some think it was to control canker worms that were infesting the trees there.  Populations have grown many times over since then.

I believe that sparrows are underrated and I blame it on the House Sparrow.  When most people think of sparrows they think of the only one that they are familiar with…the pesky House Sparrow.   A lot of people do not realize that there are other North American Sparrows that are much different than the House Sparrow and much more pleasing to observe.  Some of these you will find in your own backyard singing up a storm, getting seeds in your bird feeder,  or scratching on the ground underneath, searching for seeds that have been dropped.  Others you will find in fields or shrubby pastures or meadows.

There are 14 species found in most areas of North America that I am going to introduce you to and does not include the House Sparrow.  Some of these species are more abundant than others.

#1 American Tree Sparrow – is a plump sparrow with a long tail often seen with juncos in weedy or snow covered fields.  You  may see them hopping trying to dislodge seeds on the ground near your winter feeder.  Their breeding grounds are in the far north in Canada and Alaska. They winter in most of the United States.  The distinguishing breast spot shows the difference in the American Tree Sparrow and the Chipping below.

#2 Chipping Sparrow –  is a common sparrow seen over most of the continent.  You will see this little bird in open pine woods and edges, as well as in gardens and parks.  I usually see them on the ground all along the path while walking in the woods.

#3 Clay-colored Sparrow – is a typical summer bird of the northern prairies and Great Plains.   You may find this petite sparrow in Christmas tree farms and grassy areas with short, scattered conifers.

#4 Fox Sparrow –  is a bigger sparrow nesting in the far north and in western mountains.  It is a winter visitor in most of the eastern section of the United States and also on the edges of the western states.  You may see them scratching on the ground or in the snow making a little forward jump and then scratching back with both feet at once.  You can’t miss this guy as it is a bright brownish red with streaks on its breast.

#5 Harris’s Sparrow – is a large sparrow found  in northern Canada during breeding time  in areas of open tundra that has white pine, black spruce, larch, willow, or alder.  In winter you will see them in hedgerows, shrubby pastures, and shrubby type areas by streams near the southern Great Plains.

#6 Le Conte’s Sparrow – is a more secretive sparrow spending most of its time in tall grasses.  It breeds in wet meadows or the edges of marshes in the north and winters in the southeast. 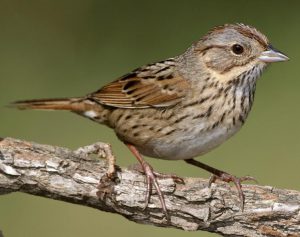 #7 Lincoln Sparrow – is a medium sized sparrow that is very secretive, sneaking along the ground around thickets in wet meadows and eating mostly insects and seeds.  They breed in the mountain areas in the west, in Alaska and Canada.  They winter in the southern United States, Mexico, and Central America.

#8 Nelson’s Sparrow –  is a marsh-loving sparrow that breeds far inland and on the coast.  It breeds along the edges of freshwater marshes and in wet meadows of interior North America, and in salt marshes along the northern Atlantic Coast.  They winter along the Atlantic Coast, mostly between North Carolina and Florida, and along the Gulf Coast states to southern Texas. 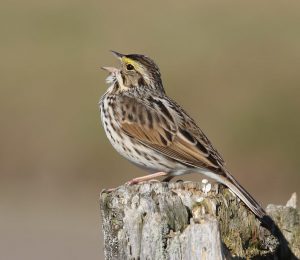 #9 Savannah Sparrow – a medium size sparrow that can be found from coast to coast and is a grassland sparrow.  They are often seen perched up on weeds or fence wires around open meadows, pastures, or edges of marshes.

#10 Song Sparrow –  is a medium size sparrow that is most abundant and can be found in almost any habitat including the undergrowth in gardens, city parks,  forest edges, thickets, and marshes.

#11 Swamp Sparrow – a medium size chunky, dark sparrow found in wetlands or open wooded swamps during the breeding season.  During the winter it can be seen in weedy fields, parks, and brush piles. 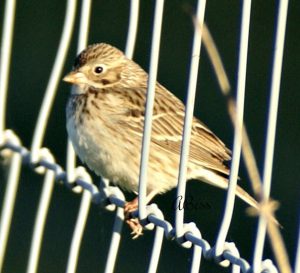 #12 Vesper Sparrow – is a medium to large size sparrow found in open grassy or weedy fields such as prairies or along roadsides.  You may see it dust bathing in bare soil in fields or on dirt roads.

#13 White-crowned Sparrow – is a medium to large size sparrow breeding in brushy areas across northern Canada and the western United States.  It winters in most of the United States and can be found at your backyard feeder eating seeds or on the ground underneath looking for seeds.

#14 White-throated Sparrow – breed mostly in Canada but you will see them in winter in woodsy suburbs, overgrown fields, or parks across eastern and southern North America and California.   They feed on sunflower seeds or millet so can be found at your feeder or on the ground beneath feeding.  You can hear this sparrow singing throughout the winter season.

The House Sparrow is the most well know sparrow that is found in North America.  It is not native here but is actually from Eurasia and Asia.  It was introduced in North America in 1851 and have since become very common.  It is the most abundant and widespread around the world.  This is the brown and grey bird that “cheeps” incessantly and flying around houses and buildings.  They like to be close by while you are eating your lunch outside hoping to get some crumbs or handouts from you.

However, House Sparrows are not the only sparrows that you can find on this continent.  There are 14 other species that exist that can be found  in most areas of North America.  There are actually about 35 species altogether,  but are not as common as the sparrows introduced in this writing.  You will enjoy observing the behaviors and characteristics of these birds for sure so keep an eye out.

If you would like to learn more about sparrows check out this book which has in depth details and great illustrations of  sparrows of the United States and Canada.

How many of these sparrows have you seen?  Let me know as I would love to hear from you.  Please comment below.