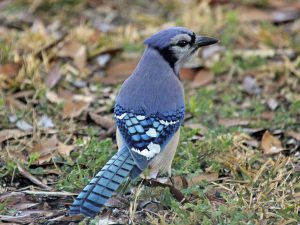 I always know when Blue jays are around because they make quite the entry with their loud raucous calling.  They usually come in a group of four or five as they make their way through the trees to my feeders.  I make sure to have a premium seed mix with peanuts and fruit in it as they love that.  I also line shelled peanuts (unsalted) along my deck railing just to watch them fly in to collect them.  Very entertaining! 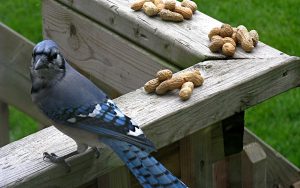 Also entertaining is observing a Blue jay take one of those peanuts and then fly down to the grass.  It will then place it within the blades of grass and then cover it up with a leaf that it finds nearby.    I really do not know if the Blue jay finds it again but I am thinking probably not especially if the leaf blows away.   :-). 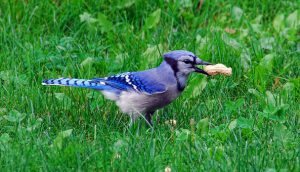 Where Are Blue Jays?

Blue jays can be found in the eastern and central parts of the United States in residential areas, woodland edges, in parks, and at backyard feeders.  Their diet consists of acorns, nuts, seeds, berries, and also caterpillars, grasshoppers, and beetles.

It is easy to attract this bird if you have bird feeders that include peanuts, sunflower, and fruits in it.  Blue jays will also gladly come in to suet feeders.

Just for fun you can also place shelled peanuts (unsalted) or just peanuts out and watch them carefully fly in to collect them.  Don’t be surprised if one bird comes in and collects them all (one by one of course).

Blue jays are one of my favorite backyard birds because of their interesting behaviors. I love to hear them enter my back yard with their loud squawking noises or their “jay, jay” calls as they come in to feed.  It is always a delight to watch them move about the trees and to the feeders.

Of course their beautiful blue coloring is always a sight to see.  It is hard to believe that they are not really blue too.  The unique inner structure of their feathers distorting the reflection of light off of the bird makes them appear blue.  Who knew?!!

The next time you see a Blue jay present make sure to observe it to see what it is doing.  You may hear it calling like a Red-tailed or Red-shouldered Hawk or you may see it anting where it rubs an ant all through its feathers before eating it.  You just never know what it will do next.  That is what is so neat about this bird!

Do you have any comments about the Blue jay?  I would love to hear from you.  Please feel free to make your comments below.