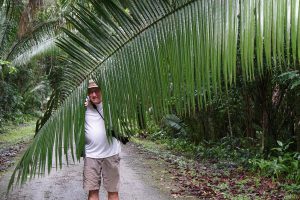 The last day in the jungle at Chan Chich Lodge started out pretty ugly weather-wise.  Jeff and I woke up to heavy rain that morning.  It stopped just long enough for us to get a good walk in along the road to the suspension bridge and around the grounds of the lodge.  At 2:00 PM we would be leaving via small aircraft from Gallon Jug which is the land that surrounds Chan Chich Lodge.  We were heading to the beach part of our vacation at MataChica Resort in San Pedro.

We went up to the lodge for lunch and Migda (not sure of correct spelling) our host, explained to us that since the weather was not looking so good the pilot (Marc), who was flying us out, thought it would be too dangerous for traveling.  He had cancelled all flights for the day.  This would mean that Jeff and I would have to travel back to Belize City via van which would take 3 1/2 hours (36 miles of rough gravel road)  and then we would board a boat for the rest of the trip (another hour) to San Pedro.  The airplane ride was only going to take 25 minutes.  Needless to say Jeff and  I were not real thrilled about this.

We we ate our lunch and went back to our cottage to pack and be ready for the van.  Then along comes Amaad, the lodge manager, knocking at our door.  Good News!   Marc decided to check the radar again and said that there was a good 2 hour window to fly and to be at the airport in Gallon Jug in 30 minutes!  No problem!   Gallon Jug was 15 minutes away and all we had to do is stuff our things in our suitcases and go.

Off to the Beach!

I really didn’t think about that very small airplane that we were flying in prior to this.   All of a sudden I was not so sure about this ride.  Jeff however was excited as can be.  Thank goodness for Marc and his good nature.  His confidence made me feel better and well I had no other choice at this point.  So off we go! 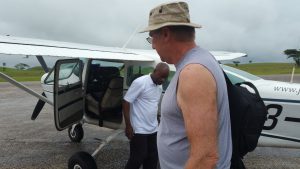 Jeff and Marc, the pilot. 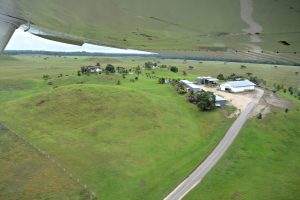 An aerial photo of Gallon Jug where we flew out of. 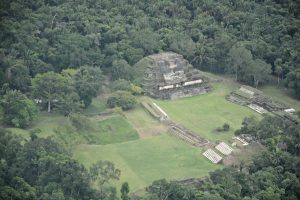 The Mayan Pyramid that is pictured on the label of Belikin Beer.  The Beer of Belize which is very good!

Everything was great until we got to San Pedro.  The rain started back up and visibility was zero by the time we got near to the airport!  I’m looking all around seeing nothing but clouds…NOTHING!   and getting just a little nervous.  Marc on the other hand looked calm as can be.  He makes a circling motion with his hands which meant he was going to fly around the clouds.  Really?  How do you know where to go and whether or not a building or something isn’t going to run into us.  Oh my goodness!  Calm down Donna!

Thankfully, we were able to land safely in the pouring rain and were then were wisked off to a van that was going to take us to the resort.    Not a fun way to arrive at the beach where it is supposed to be sunny and delightful!  Thank goodness for the strong cocktail that greeted us at the MataChica!  Something to calm the nerves.

Luckily, the rain only lasted about another hour once we arrived at our cottage and then was mostly cloudy the rest of the time.  This except for our last day which turned out to be nice and sunny! 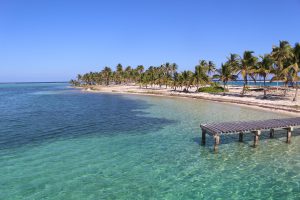 The best birding was out on the road from the MataChica along the mangroves.  This was our daily walk every morning.  We spotted Neotropic Cormorants, Roseate Spoonbills (funny but the locals called it some kind of Platypus), Tri-colored and Little Blue Herons, Bare-throated and Green Herons, White Ibis, Magnificent Frigate Bird, Sandpipers, Hawks, and warblers to name a few. 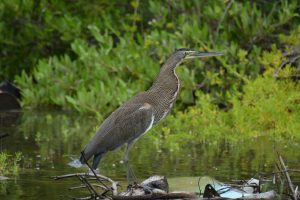 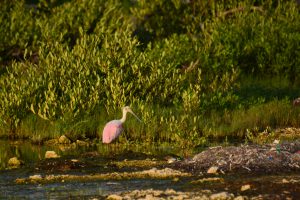 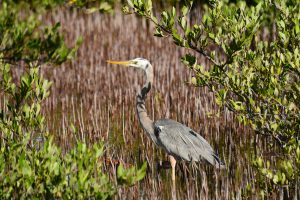 By our cottage the Hooded Oriole was always present along with  the Rufous-tailed Hummingbird. 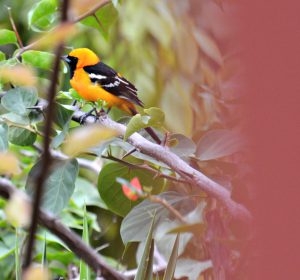 Surprisingly there was also a Yellow-throated Warbler that liked to hang around the dining area by the beach and bar.  I guess maybe there were a lot of bugs to be eaten. 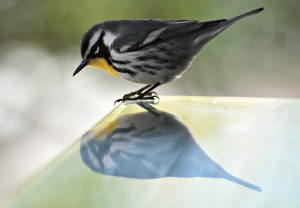 Kayaking out to the reef and back was fun even with the strong waves.  But the most interesting part of this trip was snorkeling along the reef.  Belize is one of the best places in the world for scuba diving and snorkeling.  I have been snorkeling in other places before but never saw so many types of fish.  We saw eel, angel fish, barracuda, rays, and sea turtles.  This along with the beautiful coral was absolutely amazing!

Did I mention Nurse sharks?  On the second part of our snorkeling trip we were supposed to go to Shark Alley.  Henry, our tour guide said that he would throw some food in to the sharks and we could take pictures.  Then we could continue snorkeling like before.  So no big deal right?   Well it turned out to be a Very…Big…Deal!  Henry put out bait into the water just like he said, then all of a sudden nurse sharks up to 6 or 8 feet long were everywhere!  They were practically piled on top of one another trying to get some food.   It was kind of intimidating to see such big sharks surrounding our boat.  And guess what? We were supposed to just  jump in the water and snorkel with them!  Yeah right!  Well Henry jumps in and he is all excited, just swimming around the sharks and getting into it.  Then he motions for us to join him. What?!!!! 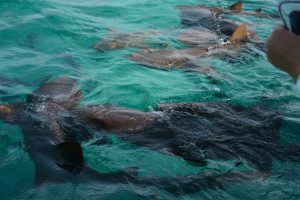 I considered this for a few moments as I watched other snorkelers gradually join in  but not all.  Some of the snorkelers were no way going into that water.  But I decided that since the snorkelers that did jump in weren’t being eaten I must be safe enough.  So I took my time but eventually jumped in and WOW!    The sharks, some rays, some needle fish were swarming me, just moving about frantically wanting some of that fish that was thrown in to feed them.  What an amazing experience!   Very exciting to say the least!  The only regrets that I have is that we did not bring an underwater video camera because that would really have captured the experience. 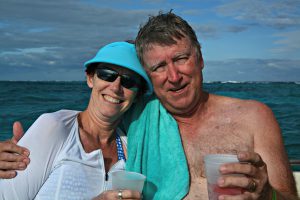 We survived the sharks!

It was a good thing that Jeff and I split up our Belize vacation between the jungle and the beach.  The jungle was exciting but I got tired of being eaten by the flies (which I was told they are only bad during the rainy season).  Deet really didn’t help much for them so I had to wear long sleeves and long pants all the time.  Plus, I always wore hiking boots because of possible snakes and because of the weather.  I was ready for a change after 4 days.

The MataChica Beach experience was a nice change of scenery and the ocean was just gorgeous!  Jeff and I were able to see a lot of sea birds on this leg of the trip even when snorkeling.  The Frigate Bird hovered over us when the nurse sharks came in feeding and Jeff got some decent photos. 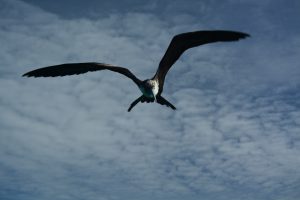 The MataChica Resort has a great pool and hot tub with poolside drink service and beautiful grounds too.  You cannot go wrong at this place. 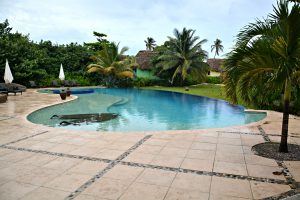 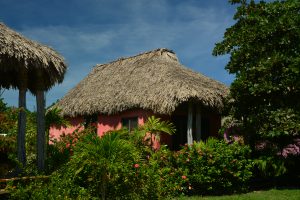 Our cottage at MataChica.  Very nice! 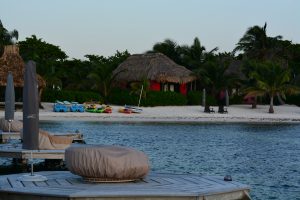 A view from the pier at MataChica

Lastly, when traveling to go home at the Belize airport we figured that the Belize Birding fun was over.  But to no avail,  flying around the shops at the airport, was a Gray-crowned Common Yellowthroat.  PERFECT! 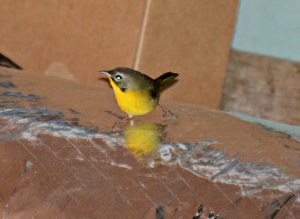 Have you ever been to Belize?  Do you have any desire to go after reading this post?  If you do and want to know more. or just have a question or two, please feel free to leave comments below.