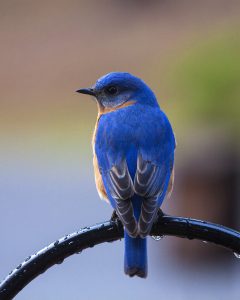 With its vibrant blue head and wings and reddish orange neck and chest who wouldn’t want the beautiful Eastern Bluebird in their backyard?  Not to mention the fact that this bird is great to have around for insect control.

We have had them in our yard at our previous homes but it has been a challenge to get them where we live now.  Our previous homes had woods nearby as well as an open field.  Bluebirds prefer this type of habitat in addition to places such as around golf courses, pastures, and nature parks.  If you are surrounded by houses like we are in a subdivision and do not have enough open space it may be more difficult to attract Bluebirds to your yard.  However, you can still try as we do (we have seen them nearby) because you just never know.

How Do You Attract Eastern Bluebirds?

It is much to your advantage if you have the type of habitat that I have mentioned above.  You may see them every once and a while flying in your yard but they just do not stick around.  There are some things that you can do to keep them there.   While they do not eat wild birdseed you can place dried meal worms out for them which you can purchase at most bird feed stores or they can be alive too.   Bluebirds also eat insects such as caterpillars, beetles, crickets, grasshoppers, and spiders.  Obviously meal worms are easier.

Note:  In winter Bluebirds will eat fruit such as blueberries, hackberries, dogwood berries, and honeysuckle.

Bird baths are also important to have, not just for Bluebirds but for all birds so that they can drink from it and  take baths to maintain their feathers.  We had a whole entire family of Bluebirds in our birdbath (previous house) that we had placed outside on our deck railing.  That was so much fun to watch! 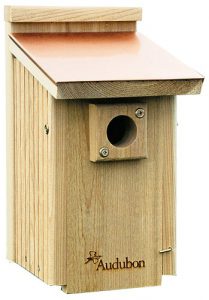 Another thing that you can do is to place a nesting box in your yard.  Bluebirds like to nest in natural cavities and old woodpecker holes but also frequent Bluebird nesting boxes/houses.  It is not just any bird box as it must have the correct specifications.  You can either purchase one that is specially designed for Bluebirds or you can Make Your Own.   The hole should be 1 1/2 inches and should be made out of wood, preferably cedar or plywood.  Also, make sure that your Bluebird house does not face direct sunlight during the day and place it towards trees or shrubs so that they have  a place to land.

Place the house anywhere from three to six feet off of the ground on a pole, post or fence.  Be sure to clean the nesting box out at the end of a breeding season and keep in mind that these birds will utilize the house during winter months if they stay year round where you live.  More on that later.

Added Note:  Starlings and House Sparrows may also want to take up residence in your Bluebird box.  If you see them taking nesting materials into the box you can just lift the lid and get rid of the materials if you do not want them moving in.

Where Are Eastern Bluebirds Located?

The Eastern Bluebird can be found east of the Rockies, southern Canada to the Gulf states, and southeastern Arizona to Nicaragua (as per Wikipedia).  The more northern birds migrate to the southeastern United States or Mexico.  Other more southern birds such as in Kentucky where I live  are year round birds but may partially migrate (meaning a short distance such as the next state)  if food is scarce.

Nesting time starts as early as February through April for the first brood.  Bluebirds may have two to three broods in a breeding season which lasts until about August.  Once the male attracts a female it is the female who primarily builds the nest which can take anywhere from five days to two weeks.  She may lay up to four or five eggs, and sometimes up to seven (one per day).  It will take anywhere from twelve to fourteen days for the incubation.  Once the birds have hatched it will be another fifteen days before the nestlings leave the nest.  Both the adult male and female feed the nestlings until then.  Then the fun begins for you when the nestlings start to fledge from the nest and you get to watch them learn to fly. 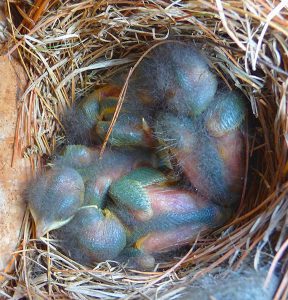 The Eastern Bluebird is always a delight to have in your backyard.  Not only is it a beautiful blue with its reddish orange breast but it is also 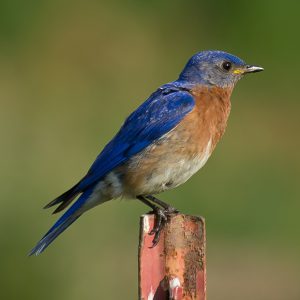 great to have around as it likes to eat insects.

You can attract Eastern Bluebirds by doing a couple of things.  Place a Bluebird nesting box in your yard either on a post or on your fence about three to six feet off of the ground.  These can either be purchased or you can build one if you are so inclined.  Just remember that Starlings and House Sparrows might also want to take up residence in the nesting box.  You can alleviate this by removing their nesting materials from the box.

It is also good to have a birdbath for them.  Not just for Bluebirds but for all of your feathered friends as they need water for drinking and bathing to maintain their feathers.   Additionally, you can add either dried or live meal worms in your bird feeder too.  Plus, since they eat fruit in the fall and winter months (if they stick around where you live) you can have fruit bearing trees such as dogwood, hackberry, and blueberry bushes.

Check with your local gardener for other trees that may attract Bluebirds.

Once you have attracted them in you can be sure that you will be entertained just watching these beauties as they fly around your yard and splash in your birdbath.

Do you get Bluebirds in your backyard and have anything to add that may be helpful to attract them?  Please feel free to make your comments below.  I would love to hear from you!