PEENT!  PEENT!  is the nasal-like sound you may hear if you happen to live near an open field or near the woods.   It is part of the American Woodcock mating dance.   In mid to late March you will hear the males at dusk or dawn starting their PEENT chanting.  If you can find where the bird is or at least locate about where it is, watch the sky because after a few of his chants he will take off in flight, going high into the sky and flying in a  circular pattern .  Then listen as he begins to touch back down to the ground usually close to where he took off….he almost sounds like a mini helicopter landing.  It really is pretty cool to see! 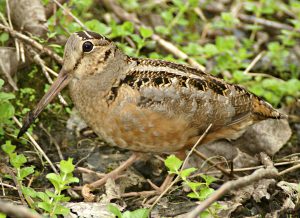 About the American Woodcock

The American Woodcock is ten to twelve inches in length and has camouflage coloring, short legs, a chubby body, a rounded type head with eyes set high and wide apart for great visual ability, and a long bill about 2.75 inches.  It’s kind of an odd looking bird but has a lot of character.

Character you say?  Yes, not only does it have a fascinating mating ritual as I described earlier, it also does a sort of HIP DANCE as it moves along the ground.  Kind of like it is moving to the beat of its favorite song, taking one step then quickly shifting back and forth with its body, then takes another step.  Check out this YouTube Video that I found for a demonstration.  I think this bird does it when searching for worms, feeling the earth for movement.

The Woodcock is related to the Sandpiper which is a shorebird, but you will find it nowhere near the water.  They like forest thickets where they are able to probe for earthworms using their long beak in the soft soil.   Woodcocks also eat beetles, insect larvae, snails, centipedes, millipedes, spiders, snipe flies, and ants. As well as seeds from different plants.

You will find this interesting bird on the eastern half of North America.  Its breeding grounds where the mating dance occurs extends from Atlantic Canada (Nova Scotia, Prince Edward Island, and New Brunswick) west to southeastern Manitoba, and south to northern Virginia, western North Carolina, Kentucky (where I live), northern Tennessee, northern Illinois, Missouri, and eastern Kansas (this information was taken from Wikipedia ).

The female comes in to check out the area where the males are and then chooses her mate.  She will be the only one who builds the nest on the ground in the woods or a grassy type field and it will be made up of a bunch of dead leaves and other debris.  She will also be the only one to incubate the eggs as the male will take no part in tending to the eggs or the young.  The males will mate with multiple females.

The female broods the nest until the nestlings dry off then they all leave the nest at the same time.  She will feed her young (up to 4 of them) for about a week and then the  nestlings will feed on their own.  After about four weeks the young become independent birds leading a solitary life.

If you live on the eastern side of the United States and Canada you have to check out the American Woodcocks doing their spring mating performance.  Show time starts at either dusk or dawn in open fields or near wooded areas.   So go to a local park or any place with an open field, land, or near a wooded area and just listen for the PEENT! sound.  It is kind of a nasal-type sound.  The male Woodcock will PEENT! several times then all of a sudden take off high into the sky and you will then see the bird circling around.  Then all of a sudden you will hear a high pitched helicopter type sound as the bird starts to descend almost right back to where it took off.

There usually is more than one male around so keep listening because you may be able to get some great entertainment for a little while.  As long as you hear them they will keep going at it.

My husband and I always look forward to this time of year because the American Woodcock performance is just the beginning of what is yet to come this spring….more bird entertainment!

Have you seen the American Woodcock do its mating ritual?  Or do you have any comments about this post.   Feel free to make your comments below.  Thank you!